What does it mean to be "thriving"?

I was reminded of a certain word today... And a certain goal: thriving. What does it mean to thrive? How can one tell if one is thriving? How can one help oneself thrive? Am I thriving?

I don't feel like I know the answers to any of these questions, entirely... With the possible exception of the last one... Which... Well, let's just say that today didn't feel very "thrive-ish", if you'll allow me the coinage.
Posted by lindes at 10:51 AM 1 comment:

I'm out for some fast-food (though Halal! My friend Ali would be happy about that) fried chicken (I'd been talking about it earlier, teaching someone the word "drumstick", and I guess I got a craving... So when I happened to see it...), and I asked for "Menü zwei"... They rung me up, and then I remembered to add "Kein Getränk"... And they changed the total for me, reducing it by the normal price of a drink. Sanity! Sanity, I say!

Back in the states, I would have had to fight to get them to not give me the cup, and they wouldn't have changed the price. At least at many places... A certain fast-food fried-chicken chain comes to mind. :)

And then they offered "brot"(sp?), which was the type of bread that I might call a pita. 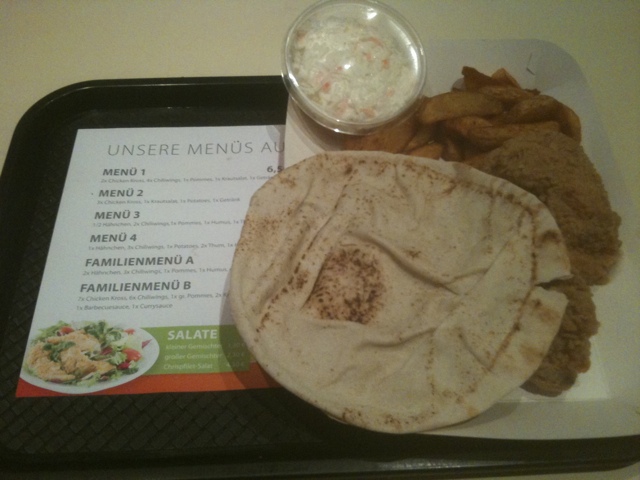 Well, here I am in Berlin.  It's now been just over a week.  I figure I'm long overdue for a blog post... but internet access comes and goes when you're hopping around from place to place a lot, as I am, thanks (many thanks, really) to CouchSurfing (CS), and my various hosts from there.

I'm having fun.  It's good.  It's not completely a new experience for me to be somewhere where I don't know the language, but it's something I've done very little of, and I'm rather appreciating it -- though of course, most folks here speak at least a little bit of English (more so than the amount of German I can speak, mostly).  But I'm learning more and more.  In fact, I just had a "tahn-dem" (tandem) language exchange meeting with someone that I met last night at a CS event for language exchange.  She brought an English-language novel that she was reading (John Grisham's The Confession), and read a few paragraphs of it, asking questions as she had them, and with me giving her any significant corrections that seemed necessary.

And then she also did me the huge favor of bringing a kid's book (a book about Der kleine Eisbär -- the little polar bear), which I then tried to read.  I think I did half-way OK with pronunciation (though I was definitely getting some corrections), but my understanding was pretty limited, starting out.  But I wrote down some words with their translations, and perhaps I can study them between now and my next meeting with her, and I'll do a little better the next time.  :)

Meanwhile, I've also participated in the 15october march here in Berlin, and helped bring the Human Mic.  More on that to come, when I have more chance to edit some video...  Hmm, I think I'll end this post now, actually, and go work on that.  So... more to come.  :)  Sorry, I meant to write more in this post, but it got interrupted... and now I'm interrupting back to work on video.  :)

Posted by lindes at 2:37 AM No comments:

Side effect of learning a new language?

Is it because I'm learning German, or am I just having a flash of dysnomia? I can't thing of the normal names for the Phớ (hmm, do I have the right o?) I normally order? The menu (for a Vietnamese place I happened upon) was mostly in German, with a bit of English thrown in... And very little Vietnamese. I'm used to a Vietnamese menu... So... I kind of wanted to order that way. But I couldn't think of it. I suppose I could have ordered phớ gai, but I kind of wanted beef... And maybe tendon. :)

Few choices on the menu, here, though... I guess there's not the same acceptance/popularity of phớ in Germany? Anyway, I totally failed to order in Vietnamese. Perhaps because I couldn't really order in German. ;)

A longer post about more things is also in the works. Hopefully it'll make its way here at some point. Well, and hopefully this post will make it. I'm without WLAN (err, wifi) here at the moment. Not sure how the iPhone blogger app behaves in that case yet. 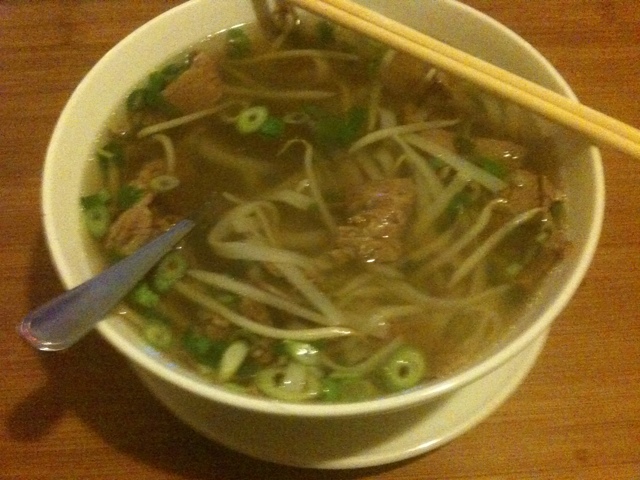 Posted by lindes at 3:01 PM No comments:

Well, I made it up to Boston, by way of western Mass... But I hadn't found a place to stay yet... Yet I did have one back in NYC... so somehow, I let myself be lured back. (By a Siren song? Hopefully nothing so dramatic... But there is a beautiful voice involved in there somewhere... But I digress.)

So, I walk down into the Times Square/42nd Street subway station for the N, Q, and R trains. I need an N or a Q to Astoria. As I'm walking down the stairs to the platform, an N is pulling away. Sigh. And the signs say something about late nights and weekends taking a Q to 57th & 7th. So after a while, when a Q bound for there does show up... I somewhat hesitantly get aboard. I know it won't get me to where I want to go (because it ends at 57th&7th, which is actually the very next stop), but I figure maybe it's telling me that at that station, there'll be more trains to Astoria?

Well, that does not appear to be the case. And when I get there, I'm on the wrong platform. And the N train, that I'd watched for to see if it might be about to arrive at 42nd -- perhaps especially during the minute or two before they closed the doors of the Q (because of "traffic ahead", a frequent occurrence)... But which had shown no signs? Well, there it was, arriving on the other platform. Alas. No time to get over there.

Fortunately, I'm now on the next N... Less of a gap, it seems, than the previous one. But still... Mildly frustrating. Especially after 4 hours of interrupted sleep on a bus from Boston. But there's a cozy bed 4 stops away, now... So that's nice.

Well, and I'll be just about in it before I have the wifi available to hit publish. ;)

Just a random excuse for an update, really. Typed on my phone.
Posted by lindes at 3:37 AM No comments: